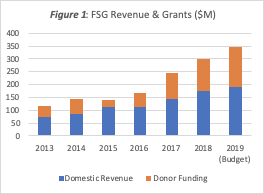 Somalia’s domestic revenue has more than doubled since the introduction of taxes in 2014 (from $84M to $190M), however donor funding has also tripled in the same period ($61M to $155) & now accounts for 40% of the government budget. How sustainable is Somalia’s fiscal revenue?

Ababsy & Associates is a professional firm provides assurance and advisory business to its clients. Ababsy & Associates’s top priority is to offer excellent client service, and provide leadership to our community. .